WHETHER YOU ARE A FAN, A PRO PLAYER, A MANAGER, OR IN LAS VEGAS FOR A GOOD TIME -VMI IS A USEFUL TOOL If you are a player, you can check your VMI for today or your team's VMI for tomorrow.  Both are useful to determine the amount of movement the pitcher you are facing will have.  Each of his pitches will be this much more or less effective given the air resistance factors due to today's and tomorrow's weather and the altitude of the stadium venue.  All of the analysis is dramatically dependent on the movement you and/or your team have been recently experiencing. 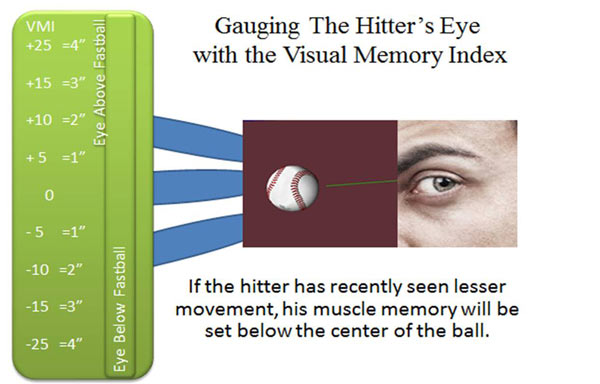 If you are a fan you can anticipate how effective your team may be and gauge how talented they truly are.  If your team is not ready for the game due to a high negative index, you can be proud if they are able to overcome it.  If they have the competitiveness to "go for the throat" when they have a high positive index, you can gauge that too.

If you are in Las Vegas and want to dabble with the odds, you'd better check to see whether you team is used to facing this amount of movement.  Good luck.  If the team is facing more movement than normal, you'd better hope that the opposing pitcher is unaware where is advantage lies.

SPORTS WEATHER IS HUGE IN BASEBALL

You have selected a team of players, most likely from a variety of teams in baseball.  Your roster is a unique blend of players from many teams which are competing daily all over the varied climates within the United States.  Altitudes vary from sea level to the mile high city.  Some players are periodically sent packing to and from the farm teams, which adds to the complexity of the varied climates each plays within.  Just as altitudes vary with each stadium, so does the temperature and humidity of the day.  The most recent visual memory of the ball track to the plate is the most critical for a player.  We have tracked each team of players since spring training and have determined an index for each team based on the most recent games each has played.  This is the product of 7 years of research, 45 years of observation, participation and study on how a player reacts to changes he is exposed to over the course of travel to and from varied climates.  The Visual Memory Index for each team is available to you on the "Team VMI's" page.  You may want to decide which player to put in the lineup for today.  Draft with and eye on WAR analytics; Manage with an eye on VMI.  If a player has been in a temperature or environment where the pitches he has been hitting had little bite and therefore not as much movement as today's game will afford the pitcher, then his index will be a negative number for today.

NEGATIVE NUMBERS ARE BAD - A minus number indicates this hitter will struggle with certain pitches today.   The four seam fastball is the one which gives the hitter most trouble if his index is in the negative, especially if it is above -7 on the index scale.  A team who's index is above 7 negative will most likely tally fewer than 9 hits in this particular game.  Many times, this team of players will not hit the ball squarely, but may get some additional hits from bloopers and Texas Leaguers.   If your fantasy player sports a high negative index he will most likely lower his hitting average in today's game.  There is an extremely high tendency, however for good focus on the part of the hitter, when the index is a small minus (i.e. between -0.01 and -2.99).  In this case, the hitter can see the small amount of additional movement and it motivates him to focus.  In addition, it is not enough movement to defeat him, so he is often successful.

POSITIVE NUMBERS ARE RELATIVELY GOOD  - Conversely, if the team your player is on sports an index that is positive, this means that the hitters for this team have been recently hitting pitches with more movement, so today's game should be less a challenge in terms of pitch movement.  A team with a positive index +7 or above will most likely tally 9 hits or more in that particular game and their hits will be sharper which may lead to more scoring even on fewer hits.  If your fantasy player sports a high positive index he will most likely raise his batting average in today's game.  Opposite to the impact of the small minus index on the psyche of the hitter, there is an extremely high tendency for lack of focus when the index is a small plus (i.e. between +0.01 and +2.99).  In this case, the hitter has recently gone through some "easier hitting days" with larger plus indices to arrive at the small plus and as he approaches a zero index he forgets to focus as accutely as normal on the pitch itself.

ZERO IS A GOOD THING  -  A zero (0.00) index means the players from this team do not need to make any adjustments for the air they will be playing in today.  Each player should experience baseball as normal with all its ups and downs, except the weight of the air will have no effect on this team of players.  However, at 0.00 there is little to help the hitters keep their focus.

The higher the index the more exagerated the impairment (-) or the advantage (+).  Indices below 3 are relatively insignificant, whereas indices above 7 are considered extremely significant.  If a player overcomes a high negative index one day, he most likely will not the next, as this is an indication the pitcher made some mistakes while pitching to this hitter.  The most common mistake for a pitcher is to be afraid to throw a four-seam fastball to a hitter who has a high negative index -7 or more for today's game. There is an extremely high tendency, however for good focus on the part of the hitter, when the index is a small minus (i.e. between -0.01 and -2.99).   Opposite to the impact of the small minus index on the psyche of the hitter, there is an extremely high tendency for lack of focus when the index is a small plus (i.e. between +0.01 and +2.99).

Each day we provide our members with the Visual Memory Index for today's games and tomorrow's games.  The index will be updated during the night and will be available by 5:00 a.m.