How Real are the Effects of Air Density on Baseball Competition?

In spite of some former players attempting to downplay its effect on the game, air density is the reason that pitchers and hitters cannot be any more consistent than they are in Major League Baseball.  It is also the reason that Ted Williams was able to end a season above .400 in batting average and no one else has achieved that milestone since.  I will explain that statement below.

Other baseball results that air density has caused are: the biggest winning percentages in summer semi-pro leagues occur in Alaska over 40 years; winners of Little League World Series, Pony League, and every other age group champion, are over 90% teams from near sea level since the 1940's;  College baseball and softball teams haven't been able to compete well with sea level colleges, so the revenue is not there to continue competing (this is especially true of teams over 2,000 feet elevation); and, the youth that participate from higher elevations than sea level struggle to catch the eye of scouts when they transition toward sea level to show their ability.  They simply don't have time to adjust.

First, let's consider the air density from the pitchers' viewpoint.

Of course, the pitchers all know that when they spin a ball it is the air that pushes it in the direction they know it will break.  However, the pitcher dares not focus on the air in detail, because the game is very complicated.  He must focus on each pitch, the strike zone location, the base runner(s), the velocity, spin rate, the game situation, defending his position, his safety,  and of course, the signals.  He must remain very aware that a low outside fastball must be placed carefully, because that pitch is more likely to be rocketed directly back at him than any other.

So, the pitcher has learned the game from a young age, one of the above essentials at a time.  Therefore, no thought to actual air density and how it may cause more or less movement. The pitcher cannot see additional movement on his fastball except in the most extreme changes of environment. This is due to his view at the time the ball enters the strike zone.   At the end of his follow through, his positioning gives him a poor view at the time of the break. He knows more about the break by the result of the pitch.  He can see the breaking ball movement better, but is prone to focus more on his velocity and spin rate as the cause.

So, now let’s add the additional complications to the game.  Every pitcher has a base amount of spin rate.  He also has a base amount of velocity.  He also has a set height, arm length, hand and finger length, relatively unique within MLB.  Furthermore, each ballpark has a base air density provided by the “standard” elevation, temperature, humidity, wind speed and direction.  If the pitcher can create a 1/8 inch differential in movement from the “base” amount that the hitter is used to seeing, he can avoid hard contact until the hitter’s natural instincts adjust. If the temperature changes in the second game of the series between these two teams, by an amount equal to or greater than 20 degrees, the movement on any pitcher's fastball will deviate from the “base amount” by 1/8 of an inch and the hitters must get adjusted.  But, the temperature alone is never the only deviation on a daily basis.  Thus, the pitcher’s natural advantage in the game of baseball.

The MLB hitter has become used to seeing hundreds of different pitchers using three or more of the more than 9 pitch-types, all locations within the strike zone, many arm angles and various speeds, all within the confines of his own home ballpark.  In spring training, he gets used to the "base amount" of movement from many different pitchers in either Florida or Phoenix.  Then, he moves back to his home ballpark and must begin the process of adjusting his natural instincts to a new "base" amount of movement there.  The complexity of adjusting to the pitcher, pitch-type, speed and location in the zone is multiplied by the need to also consider the game situation, his own safety and his base coaches signals.

So, now let's add the additional complications for the hitter.  There are only a few ballparks in early Spring in which the environmental conditions maintain a "base" amount of movement over the course of several or more games in a row.  The balance of the league's hitters are deluged with such a variety of temperatures and humidity levels at their own ballpark that it takes about three full homestands to sort of "settle in" to a norm against the various visiting pitchers.  It most likely helps to shorten the time to only three homestands to substantially adjust because the weather is beginning to warm and calm by late May in a normal MLB season.  In unique weather years, it may take the bulk of a teams' hitters even longer to settle in to their own home ballpark's base amount of movement.

These hitters must zero their focus onto the pitch that is before them, leaving such things as "why do these pitches break differently" a question far from their mind.  Their coaches can't remind them, because they were players that were hitters and/or pitchers who could not focus on that when they were playing, and from the dugout, cannot detect a 1/8th, 1/2 inch, or even 2 full inches of additional or lesser movement on the fastball.  Should the position players focus on the air?  No.  Should they get exposed daily to additional movement some way?  Yes - if possible.

Of course, between each homestand comes transitional baseball exposure to road venue "unique ball movement." At these venues, not only are the surroundings and features different, but ball movement changes are fully affected by altitude, temperature and humidity levels at each of the ballparks.  Even the domes have their own unique ball movement for the visitors to adjust to without the wind component.  It is little wonder why road numbers are normally a struggle for hitters and only in mid-season do some of the extremes become more normal within the league.  That is the most intriguing aspect of Major League Baseball and the reason it is so difficult to predict the focus and success of each team day in and day out.  Should anyone try to change that?  Absolutely not!

So, what about the "Ted Williams" reference?

The extremes in baseball movement today include about 4 full inches of differential on the 4-seam fastball alone from Denver, Colorado to any colder, sea level location.  "Movement" is limited to that portion of the pitch that is the final 10 feet or so between the pitcher and hitter.  The proof of the movement's effect on the hitter is the differential in hit per strike seen in VMI report #1 on this site.  Other extremes are venues at Phoenix, Atlanta, Kansas City, Minnesota, Texas and Pittsburgh vs. all the sea level venues. 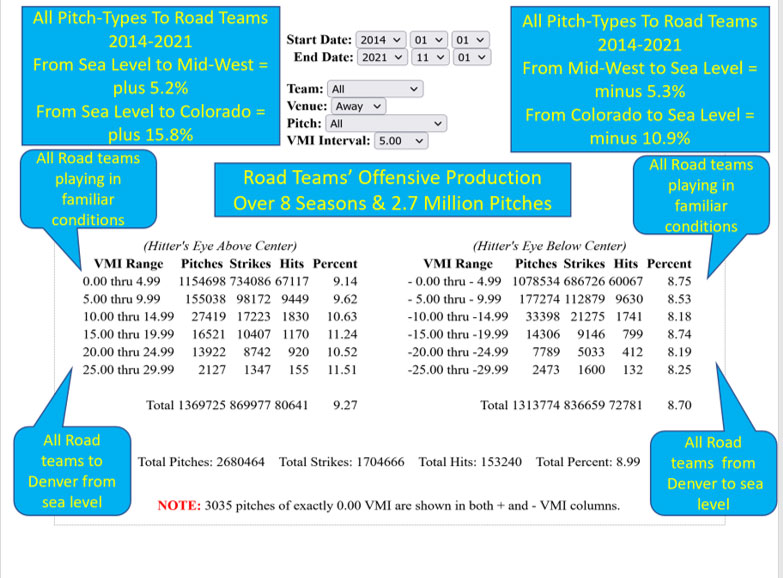 Ted Williams was not only a phenom of his day within all of Major League Baseball, but modern players will struggle mightily to catch up to his record because of the additional venues that have broadened the ball movement spectrum and created more extremes. In my opinion, no one will exceed his record over the number of games, given today's normal schedule in MLB.

So, will anything be able to help the most extreme ball movement problem for the Colorado Rockies?  Yes! But, it will take either a hyperbaric batting cage (see https://www.airchamberfacilities.com) for additional exposure to the best ball movement, or something else that hasn't been instituted yet, that will provide additional movement for Colorado Rockies' hitter preparation to transition to road venues.

Why a hyperbaric batting cage?

A "hyperbaric" is the only way to overcome the barometric pressure which is the chief cause of extra ball movement at sea level locations.  As mentioned above, the Colorado Rockies experience four inches of additional lift on the 95 mph  4-seam fastball alone compared to the lift experienced on a hot day in Denver.  Temperature differentials are responsible for about one-and-one-half inches of that lift amount.  Keep in mind that we are not talking about the barometric pressure with which media explains weather patterns.  We are talking about the "Actual" barometric pressure that is connected with the elevation of the ballpark.

Can't pitching machines be set up to create more movement?

No. The only other ways, that I know of, to affect that amount of lift is to substantially raise the seams on the baseball, increase the speed far above the norm in baseball (about 120 mph) or create a larger ball to practice with--which creates additional concerns for hitters and live pitching.  Furthermore, if someone were to raise the seams, increase the speed or create a larger ball, they would only be able to duplicate one sea level set of conditions. The hyperbaric pressurization can duplicate any and all sea level or mid-western states' conditions by the push of a button.  So the only question left to answer is; how many "best quality" pitches should a hitter see each day? There is no pitching machine that can overcome the movement on a pitch that the barometric pressure dictates within the natural atmospheric pressure caused by the elevation.