How Telling has the Tight and Reverse Hitter Formula Been? Let's Look at Ohtani.

A couple weeks ago I suggested I would do something I was simply unable to accomplish along with all else.  I was unable to write a note on every game, plus I found that to be most likely very boring to you.

More importantly, I have been doing a study on our new individual hitters' enhanced detailed match-ups to help you verify the formula as applied to an individual hitter.  This may also help you to make decisions more quickly on which roster players you want on your daily fantasy team.

For those of you who do not know what Tight and Reverse refers to; pitchers almost always use a set of at least three types of pitches to keep the hitter guessing and off-balance instead of just waiting for the perfectly expected pitch.  Historically, the four-seam fastball has always been the best and fastest pitch and off-set with the curve and change-up.  So I designated those  plus the cutter or slider as being tightly bound together as a "Tight" grouping of the traditional pitches, but normally only about three types total.  Then, each pitcher gets a score consisting of how many of each type of pitch he throws per outing.

More recently the sinker has become a significantly more used pitch than ever before and its accompanying pitches tend to be the slider, curve and change-up, as well, but more so, the slider and sometimes the cutter.  However, the sinker is the key to "opposite movement compared to the fastball", so naming the grouping with the sinker being the most used pitch became the "Reverse" pitches.   The score mentioned above follows his outings and when the sinker has been used the most, that pitcher is known as a Reverse pitcher in the amount of his score.

There tends to be a few pitchers who have made it to the Major Leagues by mixing a large number of slower, opposite of the fast primary pitches into a mix traditionally called junk pitches.  They tend to have a slower fastball as well, so can get pretty "Loose" with their pitch-mix.  These pitchers have become named Loose pitchers.

So, moving forward in the discussion; I chose to use Ohtani as a hitter, because he is both well documented and he does not play for Colorado.  However, he does hit in the West Division of the American League, so he has played in some of the higher VMI ranges--both positive and negative--but not in the highest of the ranges, which tend to be all Coor's Field related.

The most interesting part of this study is the batting average in the various VMI ranges.   Below is a graphic separating his batting results within those ranges and between Tight and Reverse designations that appear daily in the enhanced detailed match-ups report.

*Note: Sorry for all the colors, but I had to be very careful that the formulas used identified the production accurately. 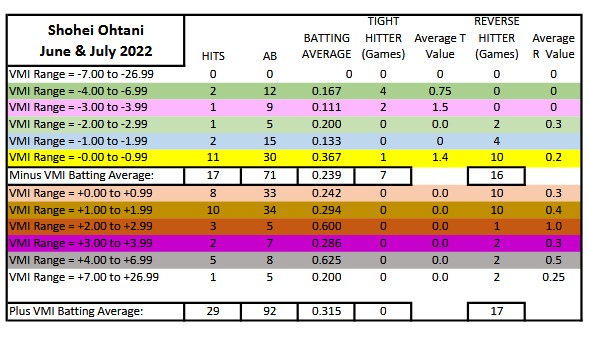 Overall, his batting average for this period was .239 when his team's VMI was in the negative ranges and .315 when his team VMI landed in the plus VMI ranges.

These numbers are not extremely unique.  They are somewhat a microcosm of the same numbers we see when Coors Field is in play.  And, it verifies the position that every player ever to be added to the Colorado roster will eventually (later if not sooner) settle into the Home / Road splits that previous players have historically accomplished.

There are those people who think that Air Density does not affect the game in favor of one team or the other, since they both must play in the same air that particular day.  However, we have seen that when players transition to a stadium where the pitch movement is greater or lesser due to climate and weather being different from what the hitters are "recently" used to seeing; then there will be an adjustment period.  This adjustment period is what the VMI gauges.  What Ohtani's numbers show us is that the entire league of hitters are substantially the same as the Colorado Rockies when they transfer in and out of differing pitch movement amounts.  It has nothing to do with strength or talent.  It is a human thing and is purely an issue of how extreme is the change to which they are needing to adjust.  Production is purely an issue of exposure to greater and lesser movement and of course, pitcher mistakes.  So, those teams and the players who need to adjust to a wider range of pitch movement will always be at a greater disadvantage and those teams and players who need adjust to only a narrow range of pitch movement differentials will always have a greater advantage in terms of physical adjustments to their hand-eye coordination. However, those same players must also endure a greater mental disadvantage in overcoming slumps for the same reason, i.e.; the psychological impact of having little unique pitch movement to help them stay focused on each and every pitch.

Because of this, I am not a proponent of Colorado spending big money on players, and I told them so years ago.  But, for all the players in MLB, the tendencies to hit well in plus VMI ranges and not so well in minus VMI ranges is valid.  And, the best hitters will most likely be those who hit equally well both the fastball with its usual pitch combo and the sinker with its associated pitches.