Which Pitches favor the pitcher in Heavy Air and which in Light Air?

The objective of this section is to help you gain insight into "when" teams and individual players will be more effective.   If you know the VMI, then you know the hitter's set-up tendency for today, and you will have a clearer picture of the hitter's capability to adjust to a particular pitch.  For example; if the "tail-off" on the Four-Seamer is lifting 6 inches today at a 65 ADI as shown below, but the hitter is used to that amount of movement and sports a +4.00 VMI today, then the following should be a tip for you, or the pitcher, or catcher:

This hitter may be more susceptible to being induced into a groundball with the two-seamer.  This is because his set-up (that is; his swing vs. what he sees) will be above the four-seamer's tail-off and fully prepared to meet that lifting pitch upon its arrival at the zone.  The two-seamer however, lifts less than the hitter is expecting from the four-seamer for which he is most often prepared, so he will need to bring the bat further downward to hit it and most likely will result in a groundball.

Everyone in baseball knows why and how to use the two-seamer, they just don't always know "when," as there has never been an analysis of the physical properties of the air causing late movement allowing an analysis of the hitter's preparation.

Now, imagine the opposite scenario, whereby the hitter is not used to that amount of movement, but has been playing in about 59 ADI.  His VMI will be as great as -4.00 or greater negative, therefore his setup to swing will naturally be below the center of the four-seamer until he adjusts.

This team's hitters would tend to be more dangerous against the two-seamer, because the set-up is closer to where the hand-eye coordination needs to be to hit the two-seamer on a line.

*Remember: We do not gauge movement over the entire pitch travel to the zone.  We only gauge the last 10 to 20 feet of the pitch in which the "Break" from it's path begins.  See "Visual Memory" for a more complete description.

The 2016 League-Wide Average Hit/Strike Rate For All Pitch Types Combined Was...9.36%

Bottom Line: Pitchers will be more successful against a team with a high minus VMI (greater than -5.00) than when the team sports a "Plus VMI of 5.00 or greater." 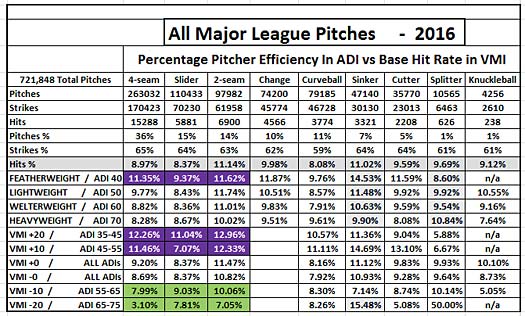 The slider is essentially a curveball that is thrown at a higher speed and therefore has lesser rotation in terms of rpm's.  Due to its speed, it is a later breaking pitch than the curveball.  In heavy air, this pitch breaks even sooner on its path toward the strike zone than it does in lighter air.  In very light air it breaks much further down the path of travel and becomes a devastating pitch in the arsenal of the high speed pitcher. A pitcher typically likes to place this pitch low, outside and off the plate, especially when he is ahead in the count.

The two-seamer is simply a pitch thrown with the ball rotated 90 degrees from the 4-seam grip position. Since there are only two short seams spinning backward, the lift is less than when four seams are whipping the air.   Also, due to the typical 75o to 80o arm angle of the pitcher, the circular seams acting against the air cause a Frisbee© effect, sliding the ball in the direction of the slant.

If you note that the pitcher your hitting team or player is matched up against in today's or tomorrow,s game is prone to throwing a high number of two-seamers, then he will be more successful against a High Plus VMI team than a High Minus VMI team with that pitch.

The change-up is obviously an off-speed pitch which is a timing nightmare for the hitter.  It is generally more effective when the high velocity pitches are being hit hardest.  However, the air resistance on such a slow pitch does not appear to be a factor in its effectiveness.

The knuckle curve is a pitch which essentially is designed to cause the hitter to mis-identify it in the first few feet of travel.  It is thrown overhand like the other pitches and, of course, in the same arm angle as are the other pitches.  However, the pitch is thrown with the fingertips pushing over the top of the ball to create forward spin in a four-seam configuration as opposed to the backward spin of the four-seamer.  It is difficult to identify early, because the  spinning four seams create a similar visual to the 4-seam fastball.  Its action is a late breaking dropping action at the end of the travel near the strike zone.   Although late breaking, the hitter must use a similar form to hit it as he uses in hitting the downward breaking curveball.  Therefore, we have not created a separate data category for the knuckle curve within our air density categories as of this time.

A "Loose Pitcher" is one who throws the Curveball, Cutter, Splitter and maybe a Slider

The Cut Fastball can be thrown either above or below the 90 mph range with good success.  The key here is probably the element of surprise.  If it is thrown too often, it is a pitch that a Major League hitter can put his bat on.  We have labeled as "Loose" a pitcher who throws many Cutters, plus many Sinkers, plus many Curveballs and/or an additional pitch.

The Splitter is essentially a change-up.  It is thrown with the fingers split wide apart to give the appearance of a fastball, either two-seam or four-seam.

Above, I have referred to four different types of pitchers that we can compare effectiveness rates against the ADI and the VMI:

Putting a microscope on the VMI

Overall, focus on the data vs the VMI reveals the following tendencies for an entire team and for the individual hitters alike:   When a team enters a new series with a high plus VMI they will begin to conform from the first game throughout the two, three, or four game series.  If they continue in a similar environment for an additional series, they will eventually become fully conformed to the environment.  Remember, they would not be identified as a high plus team if they had not arrived in this environment from a locale which produced greater ball movement.  When the team becomes fully conformed to this new, lesser movement environment, it has become a team that will be disadvantaged when they leave for a greater movement venue or weather condition.

Conversely, focus on the data vs the negative VMI numbers...

...reveals the following tendencies for an entire team and for the individual hitters alike: When a team enters a new series with a high minus VMI it will begin to adjust from the first game throughout the two, three, or four game series.  If it continues in a similar environment for an additional series, it will eventually become fully adjusted to the environment.  Remember, they would not be identified as a high minus team if they had not arrived in this environment from a locale which produced lesser ball movement.  When the team becomes fully adjusted to this new, greater movement environment, it has become a team that is advantaged if they leave the first series and second series for a venue of lesser movement and again become a higher plus VMI team.