What a debacle by Tampa Bay.  It starts with the manager who started a "Reverse" Pitcher (Venters) to go against a Minus VMI team at their own home.  Now, I can't blame a manager for what he doesn't know about modern baseball analysis.  I don't even know him.  But, worse yet, when a Reverse Pitcher begins a game and can't get through one inning with his Two-Seamer--why would a manager follow him up with another Two-Seam Pitcher (Yarbrough)?  That's two Reverse Pitchers back to back.  What? His two-seamers are better than the first pitchers two-seamers?

The debacle was complete, I suppose, when the third "Reverse" pitcher was called upon (Romo) to go against a -6.96 VMI team who by definition is almost a full inch under the Four-Seamer, and therefore set up perfectly for the Two-Seamer and other downward breaking stuff.  But, with six Tight pitchers in the Bull-Pen, not one was used until finally Alvarado was called upon to try to get the Nationals out. The entire game only 10 Four-seamers were thrown for no hits by Washington.  See the View Game on BaseballVMI.com and then go to the T-L-R Report or the individual Pitcher or Team by ADI for yesterdays most mysterious game management in MLB. #howdtheywin #whydtheylose 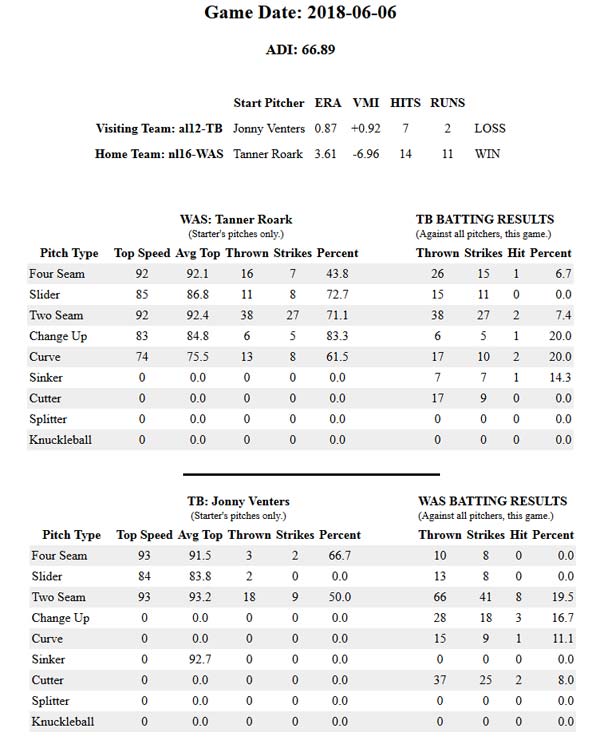