How'd They Win; Why'd They Lose - LAA vs BOS

Boston escaped with a win after a scare in the 7th, to put themselves back into first place in the division.  Was there anything the Red Sox or the Angels could have known in advance by watching the VMI for game time?  Was there anything you, as a daily fantasy player or an over/under player that would tip your hand ahead of game time at such low VMI’s?

The Angels were at a minus 2.49 (-2.49) VMI which tells you what?  We know that they travelled from Kansas City in the Central Division, so after a series there, they would be more like a Kansas City team than a West Coast team upon arrival and normally the Central Division struggles to keep up with coastal teams.  This VMI reveals that much, but -2.5 means that the 4-seamer would be lifting less than ½ inch more than they were used to, so it only makes them focus more—as it is not outside their typical range of movement experience.  Boston’s big scare came from sliders and two-seamers.  So, one might say, be more careful if you are Boston about throwing a lesser lifting 2-seamer to a minus 2.5 VMI team, but that is probably being too harsh, as pitchers must maintain a variety.  Yet, you as a predicter of games, may have been able to tell if, and/or which pitcher may get in trouble with his normal number of 2-seamers.

Boston came into the game at a minus zero something (-0.09) VMI.  Zero VMI’s mean that the team has been recently playing in these same exact conditions for a series or more prior to this game.  It means that holding their focus is more difficult, that is, maintaining their focus on the pitches rather than on their mechanics or strike zone decision making.  This is where teams start trading wins and losses and it is difficult to determine ahead of time.  The home team has their normal home team advantage.  Whether they will “zero out” or be extremely dangerous on all pitches cannot be determined ahead of time with the VMI being so low.

Obviously, the higher VMI’s tell you more and allow you to determine which pitchers may be in trouble, depending on the pitch-type each one typically throws.  #howdtheywin #whydtheylose 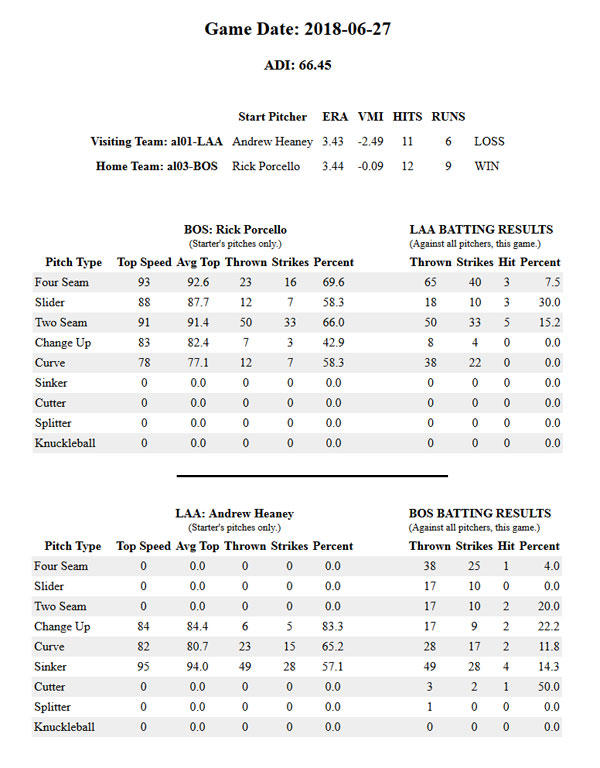