At a plus almost 5 VMI, it was no surprise that Marquez' Four-Seamer was hit pretty hard, even though it was in the 97 mph ranges.  Of course, this is because the Dodgers had been in San Francisco in even heavier air for a full series before this game.  That exposure was responsible for the whole starting line-up being ready for good upward lift on that particular pitch.

The slider and two seam pitches also got hit productively, which is also no surprise, as the downward and side movement would naturally be less than what they were exposed to against the Giants.

On the other hand, Colorado was facing a tough up-hill battle.  Their starting line-up had more than one series in Colorado immediately preceding this game.  As most of you know, that is a recipe for disaster against the Four-Seam fastball.  The Rockies were not productive at all against Buehler's 97 mph Four-Seamer.  He got 34 strikes by the Rockies with zero hits off that pitch.  Very Predictable at a minus 17 VMI which means their hitting eye would be two and one half inches below a typical 95 mph Four-Seamer.   They actually did a pretty good job of just popping it to the outfield, not striking out more and etc.

The Two-Seamer lifts about 60% as much as a four-seamer at the same speed but tails off more.  The Rockies were not productive on either it, or against the Slider.

The only hits they got were against the Change-Up, Sinker and Cutter which is somewhat predictable since their set-up is predictably low and therefore closer to the center of the baseball on those heavily downward breaking pitches. 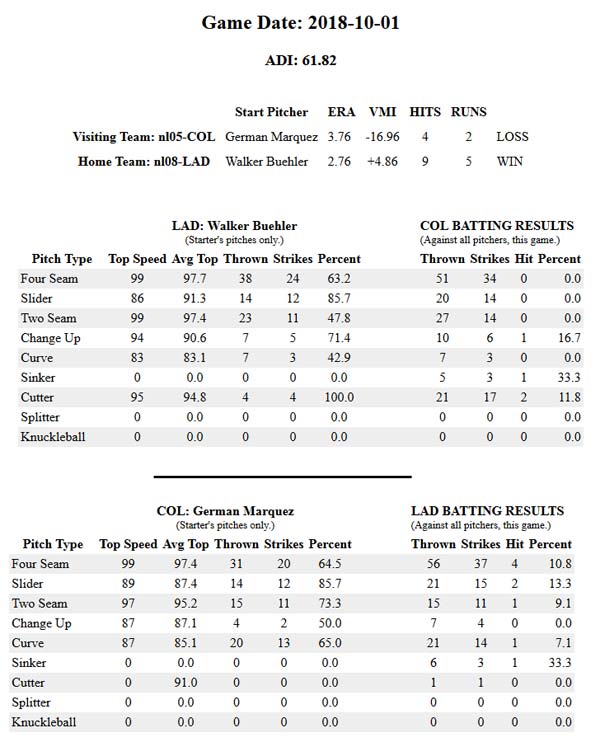