VMI Production in the Smallest of Ranges

I have previously stated that our website has been tracking pitches since 2014. Actually, I have been tracking team production against the ADI and VMI since 2001 and 2005 respectively. The pitch tracking system which is now in place allows input of the actual pitches, pitcher, pitch speed and hitter plus his production. We did not begin applying the ADI to every pitcher until 2015-and, then only on a few of the teams. So I am learning new things on an annual and sometimes monthly basis. Of course we are working on a win-loss predictive index, but at this time, it is not ready for publication.

Below is a chart of the percentages of hits to strikes thrown in the primary ADIs and in the VMI ranges with "probable" ADI ranges listed. I say probable, because any ADI will eventually produce a zero VMI, as the team of hitters adjust to this amount of ball movement. The following is a season-long recap which seems to be very similar to every other year in terms of pitch-type, pitcher efficiency, and of course, hitter production. 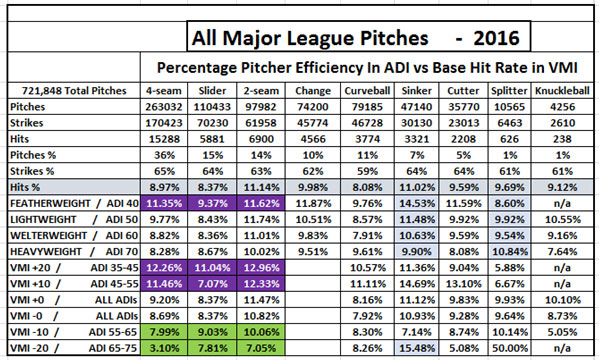 VMI Tracking: Keep the following graphic in mind as you watch a series between two teams; conforming to lesser movement and adjusting to greater movement is a strong tendency and has remained true over the course of full seasons since 2001. April of each year gets it started, but by mid-May to mid-June, conformity is apparent. 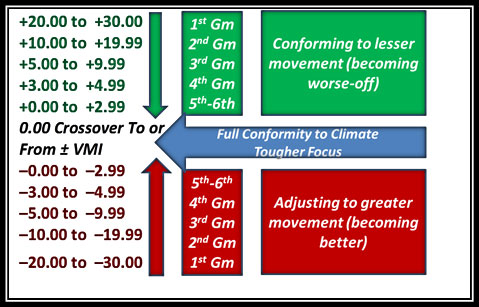 The crossover from Plus to Minus makes the transitional baseball tricky, but fun.

When a team has been in a long home stand against several opponents and a cold front comes through the region, the home team drops from a small plus to a lager minus VMI. A home team can normally overcome it, but a visiting team may struggle if the change in temperature is downward by more than about ten degrees Fahrenheit.

Tricky transitions also occur when a road team moves from an area such as Los Angeles Dodgers to San Francisco Giants immediately after getting fully adjusted to Dodger Stadium. In this case it is caused by both an elevation change and normally includes a temperature change. Most people imagine that Dodger Stadium is on the coast, but it is actually over 500 feet elevation and far from the coast making it play almost exactly like a mid-west stadium. Wonder why the Dodgers struggle to win it all?

A crossover from Minus to Plus normally occurs to a road team switching to a less dense climate in the middle of the trip.

A reverse example can be used: a team travelling first to San Francisco and getting fully adjusted after, say, a four-game series, then moving on to face the Dodgers in their stadium. A typical Central Division team would first go into the Giants' stadium as a Mid-Minus VMI Team and then come out as a Low Plus VMI Team in Dodger Stadium (500 feet higher & warmer in Chavez Ravine).

Smaller crossovers typically happen on the East Coast where coastal teams play each other. These crossovers are lesser in degree, so don't greatly affect the teams, but when they reach above ±4.00, these crossovers can create movement issues in addition to the usual focus issues for a hitting team.

The uniqueness in the varied VMI Ranges and how to interpret them for your selections:

Plus Ranges of the VMI
+0.01 to +2.00 - This range is where air density is pretty much a non-factor. The ball movement is less than the hitter is used to seeing, but by an amount that does not exceed ¼ of an inch against the four-seamer. For you and I, trying to predict an outcome between teams, hitters, or pitchers is difficult because this is the range where most games in MLB are played. Since ball movement is not unique, then mental focus and consistent performance is a bigger challenge for both hitters and pitchers. This range produces sort of a 50/50 league in terms of wins and losses. It is the range where there is a high tendency to win today and lose tomorrow more than in any other VMI range. So when picking individuals who may overcome the norm, try to find mentally tough players for your team who perform consistently well in this range-this year it has been a guy like D.J. LeMahieu. Also, depend on more of your traditional indices than on the VMI for prediction.

Minus Ranges of the VMI
-0.01 to -2.00 - Once a team gets close to the -2.00 range is where air density may begin to be more than a non-factor. The Four-Seam ball movement is a little more than the hitter is used to seeing, but by an amount that does not exceed ¼ of an inch. Since ball movement is only slightly more and not really unique, then mental focus and consistent performance is a bigger challenge for both hitters and pitchers. But here is where the hitter can see what the pitcher, catcher and manager cannot see. The hitter notices on the first swing at a fastball (4-seamer) that he is not on it. He either hits a long fly ball or foul or maybe even a pop-up. So, this creates the beginning of his better focus on the pitch itself for this particular game. After one or two at bats (by approximately the fourth inning), this hitter will most likely be very dangerous against the Four-Seamer, and since his set-up is closer to the Two-Seam and Sinker--anything can happen. The pitcher who tends to be a Loose Pitcher, attempting to get slower breaking pitches by this hitter, can come away very disappointed.

So what does zero VMI really mean?

As I mentioned earlier, zero is where 50/50 winning baseball occurs: that is, where teams tend most to win today and lose tomorrow. Zero, of course, means the players are very familiar with how the track of the pitch looks and how to set up to hit it squarely. The players tend to turn their attention to the pitcher, his form, and his release, and may start trying to out-guess the pitcher and catcher. They can place the ball better in this range and may also start trying to "beat the shift," because making contact is relatively easy. Small ball is more successful because bunting is more consistent, as is hit and run. However, at zero and therefore "full conformity to the climate," little things such as a weird release, or additional rpm on the seams of a ball can make enough difference to throw hitters off their game. Their focus also tends to shift to their own mechanics. Frustration sets in at this level for all the teams, and this is also where an entire team can begin to hit the ball straight at the defensive players which adds to the frustration. Whether this is because of over-thinking or just the breaks of the game is certainly still in question, but this tends to occur more frequently about the 5th or 6th game within the same climate, and you will notice that these teams tend to have a "Zero" day of scoring. In most environments both teams (home and visitor) will sport a VMI below +2.00 and -2.00 at the same time, so it is little help in determining which team will follow this trend, but most likely it will be the team in the series who is dropping in VMI from the plus side of zero rather than the team who is rising toward zero from the large minus VMI side of the index. See the graphic below with the arrow at the far right: 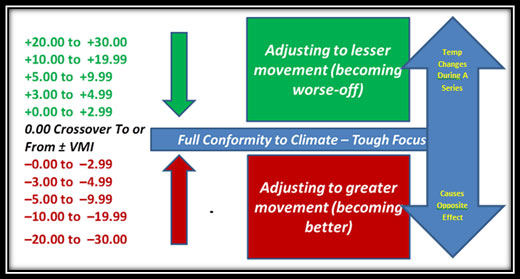 The Cross-Over from Minus to Plus

As you have undoubtedly noticed, the team VMI formulas track the team from "very unfamiliar" for game one away from their home stadiums and progressively get closer to zero ("familiar conditions"). This is true on both sides of zero. When a team begins at a high minus for the first game, and then progresses toward zero, it is getting better; however, when a team begins at a high plus and progresses toward zero, it is getting worse. That is, the team becomes more and more acclimated to the ball movement, and at the range of below about 3.00, the players tend to lose focus more easily.

The Cross-Over from Plus to Minus

The small increment crossovers occur once a team gets fully acclimated and a cold front comes through, or a team moves to a similar stadium environment such as where Mid-West Central Division teams play. They also happen more frequently when a team remains in its home stadium for an extended home stand. Mental focus is tough in this zero to ± 2.00 Visual Memory state.

It appears from our data that the home team enjoys about a 53% winning percentage over the visiting team under these zero to 3.00 VMI ranges. That should match up with Sabermetric data fairly closely for an overall home team advantage.

Larger crossovers also occur, but less frequently. Later in this series I'll outline some of the physical and mental tendencies that occur due to larger crossovers.

In my next article I will venture into the higher VMI ranges and reveal some of the mental and physical aspects that appear to be a reality in MLB.

Watch out for a team who consistently overcomes these VMI tendencies. That team is staying focused and it can carry them -all the way!

Visual Memory by Clifton Neeley, creator of the Visual Memory Index© and author of the web-site www.baseballvmi.com. Clifton pitched and played baseball and fast-pitch softball in the mountainous southwest Colorado area from 4,000 feet in Grand Junction to 6,000 feet in Durango to 9,000 feet in Telluride prior to his college experience in baseball.